disclaimer:  I recently swapped the collection of Little Dot in-ears with Ngoshawk Sounds in exchange for his Phonics models to review.  I have no financial interest in Phonics and these were returned to their rightful owner after review (and longer than he probably would have liked).   I recommend you check out Ngoshawk Sounds as he does good work and there is no way any one of us can cover everything out there ;).     For more information on their complete line of in-ears contact Phoniciems .


I am going to forego this section as I received both in-ears in their respective cases (both of which are leather and quite nice) but did not receive the full kit so cannot comment on what all is included with purchase.   The cases I received were a rectangular clam-shell with the BWD9.2 and a snuff-tin style round leather case with the BW4.  The larger clam-shell would be my preference as the smaller snuff-tin is a little cramped.

Now we get to the fun part.  Phonic’s models are not cookie cutter resin and metal shells like we see all too often.  Nor are they acrylic shells with a wooden faceplate glued on top.  They are instead 100% reclaimed wood shells made by hand at the time of order.  For that reason, your pair won’t looks exactly like either of the ones I have shown here.  The upside is you can customize to your heart’s content (and wallet’s dismay) by calling or emailing Kenneth at Phonic.   There are several choices of woods, options for different connector types, and even the option for a lightning cable for use with I-phones if desired.  The two reviewed here are Padauk (BWD9.2) and Taiwanese Acacia (BW4).    The Acacia is from the Timberbank reclamation project in Hong Kong and is one of the ways Phonic claims to be environmental friendly by sourcing reclaimed materials where possible.    One should know that particularly with the dynamic driver models but to some degree with all of them, choice of wood will change the signature as each has its own unique character.  Again, emailing Phonic will help sort out the best options for your listening preferences.    The shells are 2 pieces with the body of the in-ear including the nozzles being one continuous piece of wood while the faceplates are a 2nd part that is cut to fit and glued in place after the internals are loaded.  Shells are on the large side by necessity as making them overly thin both reduces the resonance gained from the wood and risks  breakage.   Nozzles have a small ring cut into them to aid in tip retention and are fairly long with no rake so tips seat fairly deep but isolation is average.

Phonics offers a wide range of models with either all balanced armatures or a single dynamic driver.  Perhaps oddly in the current market, no hybrids are available but that may change as the company moves forward.   Each model is tuned differently with each wood also contributing to the overall signature produced.   The two reviewed here are the BW4 which is an all balanced armature model with 4 drivers.  Phonic doesn’t go into detail on which drivers are used but it does appear that they purchase both Sonion and Knowles drivers and possibly others as well and the crossover used seems to be a 3 way cross so my guess is single bass driver, single mid driver and dual treble.    The BW4 has a nominal impedance of 16Ω and a sensitivity of 114 dB/mW.  I found the BW4 easier to drive than the 9.2 and better paired with lower powered sources as a result.  Those looking for a model that can be driven well with a cell phone will want to look at the BW4.      The BWD9.2 uses a single 9.2mm dynamic (yes, their naming conventions are a bit pedestrian)  while again choosing not to release information regarding the diaphragm material or maker.  Impedance is again listed at 16Ω but sensitivity is closer to 92 dB/mW.    The 9.2 does need more power than the 4 to get up to speed and will reward the user for employing a bit more potent amplifier.

Based on the graphs it should be no surprise that Phonic bills the BW4 as the Audiophile model while the 9.2 is billed for live and pop music.  The two have little in common so sound notes are divided into two sections below.  It should also be noted that both models do have interchangeable filters (So that thing in the nozzle of the BWD9.2 is not a BA, but a filter) that can be used to fine tune the sound and again, Phonic is able to work with customers to get the best match.  Because these are borrowed and the procedure to change filters involves tiny parts and potential for loss or damage, I refrained from doing so and tested only with them as shipped. 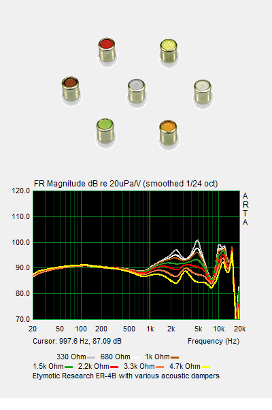 Sub-bass is typical of balanced armatures and has better depth than some but lacks the punch of a dynamic.  What it does have is good control and texture to nearly the bottom of each reach so offers a very well controlled bass with decent depth.  Mid-bass is also quite fast with good detail and texture and no discernible mid-bass bleed to obstruct the lower mids.  Decay is slightly slower than attack but still a bit too fast to be totally natural and could use a touch slower decay to add a bit more thickness and warmth.  Bass in the overall is not emphasized and while present in the mix will not make those who expect an elevated bass happy.   I found it to be more natural in representation as bass is rarely front and center in orchestral or string ensembles.

Lower mids climb from the mid-bass and then reach a plateau that extends to the upper-mids where they gracefully rise a bit as they meet the lower treble.   Lower mids have good detail and texture giving male vocals good timbre and adequate weight.  Guitar growl is sharp-edged with good realism and strings are also well rendered in both lower and true mids.   Here again we have a trade off with speed outpacing weight, so while vocals have good timbre they can come across slightly thin at times.   I think maybe a 5 ba with double drivers in the mids could give both the speed and the weight to really make the mids the star of the show, as it is they are well represented but stop short of being mid-centric.

Lower treble is the highest point of the signature and while it does give the BW4 a bright sound, it stops short of becoming strident and fatiguing.   The BW4 hits a nice note on the true treble where it provides enough air to feel open and detailed but doesn’t get brittle or brassy as overly aggressive treble often can.  I suspect this is the biggest contribution of the filters we were talking about earlier.  Snare rattle is good and crisp and cymbals sound good if not quite perfect.  high-hat still has a little of that metallic click at times but this is very hard to avoid so I’m willing to forgive that in a mid-market piece.    The  BW4 has good top-end and enough sparkle to open up the stage before rolling off somewhere around the 12kHz mark.

Stage has a bit more width than depth and some height but falls on the smaller side overall and would be best likened to a small theater.   Seating the orchestra is fairly straight forward with no major overlaps or misplacement as both layering and instrument separation are quite good.    Imaging is good with positions easily identified with good precision and movements are tracked easily as well.   I found no tendency to compress even with particularly busy tracks.

The BWD9.2 kind of flips the script on the BW4.  Sub-bass is big and bold here with good reach down into the lower 30Hz range before gently rolling off.    The emphasis peaks between 50 and 75 Hz before slowly dropping back through the mid bass to a plateau of mids.   Mid-bass has good slam but lacks a bit of detail compared to the BW4.  The 9.2 is definitely the unit for those looking for slam and rumble for movies or sheer enjoyment while the 4 is much closer to linear.

Transition into the lower mids does have some mid-bass bleed that adds a bit of warmth but does obstruct some small details in the lower mids at times.   Lower mids have good weight and male vocals stand equally with female vocals which is a different tuning than many.    Guitar growl is good and also shares that forward step to cut through the mix making the 9.2 a good choice for rock music.   True and upper mids are well represented with good weight and ample detail and female vocals are well voiced.   I found the 9.2 particularly good for rock duets like Tom Petty/Stevie Nicks “Stop draggin my heart around” and Rossington Collins “Don’t misunderstand me”.

Lower treble shares the level of the upper-mids before dropping back above that.  True treble is pretty scooped with a bit of energy added back into the 9-10kHz range to keep things from feeling too closed down.  I’d prefer a bit less of a scoop here as you lose some detail in the treble with this tuning and it keeps the 9.2 from feeling as open and spacious as the 4 can.   Snare rattle is not quite as crisp and feels slightly blunted comparatively.    The 9.2 tuning overall is warm compared to the bw4’s bright tilt largely due to the combination of mid-bass bleed and early treble roll-off.

Stage is well proportioned, but small.  the 9.2 is best described as standing on the front row at a small venue as the performance occurs immediately in front of the listener but one does not get a sense of a lot of room either to the sides or the rear.   Seating the orchestra does have some overlaps due to that compressed stage.    Instrument separation is adequate but does start to break down as tracks get particularly complex and again shows why this is billed as the “live and pop” model and that is where it is at its best.  Imaging is good with movement easily tracked but positions are not as defined as the BW4.    There is some compression that becomes evident in fast passages with a lot of complex bass lines.

I enjoyed the opportunity to try the Phonic’s models and would like to thank Ngoshawk again for the chance to try these.  This is a great example of a boutique maker that I might not have ever known existed if not for word of mouth and with shows largely on hold due to Covid, I might never have had the opportunity to try them out without his generosity.    I really like the fact that the wood choices are not just cosmetic and offer the user the ability to tune the product to their preferences because the results are functional art.  The BW4 is my preference of the two as I tend to like a bit more neutral signature than Ngoshawk, but I can see why he likes the lively nature of the 9.2 for rock and blues.   If you  have an interest in a hand-made, custom-tuned gorgeous in-ear, Phonic no doubt has a model to meet your needs.  Just remember with these being bespoke products, wait times can be 10-15 weeks depending on their workload.  The good news is they send photos of the build process so you know where you are in the process at all times along the way.