Disclaimer:  NiceHCK provided the EzAudio D4 to me as a review sample.  I paid a very minimal price for the D4.   The good news is with 11.11 coming up you can pay nearly that same price as NiceHCK has reduced the price of the D4 to $7.99 for Singles day.   If you like what you read here on the D4, you should consider grabbing a pair while they are available at such a great price.

The D4 comes packed in a white box with the logo on the front in blue and the details about the specs on the reverse.   Inside the cardboard box is a semi-hard case.  This is rubberized and has some give but is stiff enough to protect the contents.  A carabiner for attaching the case to a beltloop is also provided in the box.   The headphones and silicone tips (3 sizes) are hiding inside the case and complete the bundle.   At a price point substantially below $20 I don’t expect a particularly high end packaging so the hard case and carabiner was a particularly nice touch.   My immediate thought was to compare it to the Mixcder X5 as another budget headphone who’s kit outperformed its price point.   The X5 excelled in sonics as well so it set the bar for the D4.

The D4 is a barrel style earpiece made out of solid metal.  The nozzle is short with a pronounced lip to hold tips in place.   R and L are marked on the side of the barrel in front of the black plastic band that provides the cable strain relief.   The faceplate has a single vent near the top center with a stylized E logo directly beneath it.    Overall the fit and finish on the earpieces is very good.  The joint between parts of the shell is well hidden by the band and no gaps or glue was visible.    The earpieces are fairly small and with their straight into the ear design even those with small ears shouldn’t have trouble getting a proper fit.  Weight is minimal so no pull of the earpieces by gravity was noticed as sometimes happens on heavier models.

The D4 relies on a single 10mm dynamic driver which is referred to as titanizing.  I can only assume this is a reference to titanium coating of the diaphragm but cannot find additional ad copy to support that.   The driver has a rated impedance of 32Ω with a sensitivity of 99 dB/mW although again the ad copy fails to mention the specifics of how those ratings were obtained or at what frequency.   I will say from driving the D4 that it does require a bit more energy to reach volume levels I typically listen at when compared to some other 32Ω in-ears of similar sensitivities.  My guess is either sensitivity is not quite as high as listed or the D4 comes closer to 50Ω than 32Ω.   I found power required to run the D4 was similar to the Campfire Comet.

The cable starts with a 90° TRRS 3.5mm jack with good strain relief.  The cable is then cloth coated up to the splitter and soft rubber coated above the splitter.  The splitter appears to be injection molded plastic and does not have any strain relief above or below it.  A chin slider made of the same plastic sits immediately on top of the splitter and has plenty of travel for adjustment before being blocked by the 1 button mic on the right side of the cable.   The cable enters the barrel of the earpiece at a 90° angle and is encased in a plastic band that encircles the earbud.  This allows for tip down or tip up wear as the exit point of the cable is near the outer edge of the earpiece.  When worn tip up, the microphone is about equally above the mouth as it is below in tip down wear so picks up about equally well.   Cables are not removable but for the price point this isn’t expected.

The microphone differs from many on budget in-ears.  It is a plastic capsule in line on the right cable but is not the typical 3 button arrangement.  In fact, at first it appears to be just a microphone and not a remote at all.   the entire front shell works as a single button which requires that the remote be held between the thumb and forefinger to operate.   So the remote will work for play/pause or call answer but does not offer the forward/back or +/- volume options of the more common 3 button design.    Functionally, the mic works well for calls but suffers from some outside noise due to rubbing on the side of your face or clothing while talking.   The mic also seemed to be susceptible to wind noise if worn outdoors.

All of my listening notes are done with the largest provided tips installed. 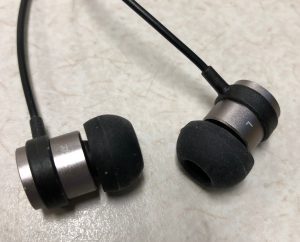 Sub-bass extension is really quite good with roll-off not becoming pronounced until below 35hz.  Mid-bass is very much the star of the show and is forward of all of the rest of the signature but not by more than a couple dB at most which gives the D4 a nice warm feel without feeling muddy or sloppy at the same time.   I was pleasantly surprised at the level of control exercised in the low-end with quick decay and good tonality.   Overall, this is not the bass one expects from this price point.

Mids on the D4 are the hardest to describe and come across as mildly recessed on the whole.  When divided into their component parts, what we see is lower mids start at the level of the mid-bass and decline as you move into the true mids.   There is perceptible bass-bleed which adds some warmth but not nearly as much as seen in other products at this price point and again is not sufficient to distract significantly from the mids.  The true mids are the lowest point in the slope and are 4-5dB behind the mid-bass hump.  Upper mids climb back up  toward the level of the bass but never quite reach it and blend well into the lower treble which continues the climb back toward the bass level.

The lower treble climbs from the upper mids and levels off at the 4-5kHz range about 2-3dB behind the mid bass hump.    The true treble range falls off fairly sharply above 5kHz and a second smaller plateau exists at the 10-12kHz range albeit down 4dB from the main plateau of the lower treble.   The combination of forward lower treble, with rolled off treble and some energy brought back into the mix at the 10-12kHz gives a nice open clear tone to the D4 without getting strident or harsh.

Soundstage is well proportioned as depth didn’t seem to be a lot less than width as is so common on lower end products.  Neither dimension seems particularly expansive, but neither feels closed-in or claustrophobic either.   Layering is better than expected and the clarity achieved is surprising for a single driver at this price.   Imaging is good, but nothing out of the ordinary so while not likely to distract, it isn’t likely to be the biggest selling point either.

I keep coming back to “this thing costs what?”   I even passed these around my office without telling any of the people what they were or the price point and asked them to listen to whatever they wanted to and then let me know what price bracket the D4 fit in.   Without fail, everyone who tried them said at least $50 and maybe a good bit more.   Good, I haven’t lost my marbles as at least 10 other people felt the same way I do.   These sound way better than they should for their asking price and to top it off, they are on sale for Singles Day at $8.    The D4 is a great example of what Chi-fi is doing these days to upset the audio applecart.  Were this same headphone badged with a big name brand, they would easily sell for 5 to 10 times the asking price.