I was provided the Crazier R3 DAP by Gearbest in exchange for reviewing it. I mentioned to George that the Crazier appeared to be a rebadged Nintaus x10 and that I wondered if the firmware was improved on the Crazier. I was hoping for a Benjie / Agptek type relationship where maybe Crazier had improved upon the firmware foibles of the original x10. George kindly sent me the Crazier R3 to compare.

The Nintaus x10 was a pretty good DAP in the $60 price range mostly due to its all-metal construction, line out, built in EQ, DSD support, and weeklong battery life. While the DAP is fairly basic as far as features are concerned (no Bluetooth or USB DAC functions), what it does, it does well and cons are usually things like, No dedicated volume buttons, and typical UI issues as is common with most low-end Chinese made DAPs. My hope was that maybe Crazier had accounted for a few of the later with the R3 version.

The R3 came in a simple black cardboard box with Crazier in English and Chinese printed in silver. As is typical, the box did little to show what product was inside and did not have pictures or specifications on the exterior of the box. This packaging is obviously not for retail sale from shelf as it would be difficult to tell what was in the packaging. 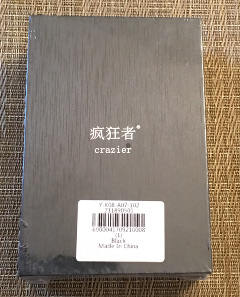 The R3 was well padded and well protected from the cable and manual as it sits on a shelf in a foam surround with a small padded bag holding the R3. In the layer below the R3 is a manual and USB charging cable. Sparse, but really all that is necessary. (This is the first departure from the Nintaus badged product as the x10 came with a 16 GB card and a silicone carry case that was not in the Crazier package) 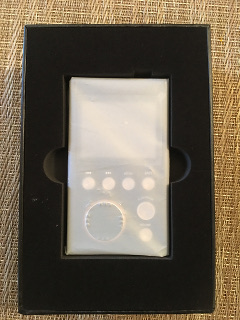 The R3 has a solid aluminum chassis and overall construction is very good. Edges are smoothed for pocket carry and buttons are well laid out. The 2 inch screen has a resolution of 320×240 and while certainly not the highest resolution we have seen it does a reasonable job of displaying album art and it certainly is readable enough even at strange angles. Beneath the screen are the controls. First a row of four buttons all of equal size that are (left to right) Previous, next, menu, back. Below the previous and next is a larger scroll wheel; while below back is an enlarged play/pause button and then a single volume button below the play. 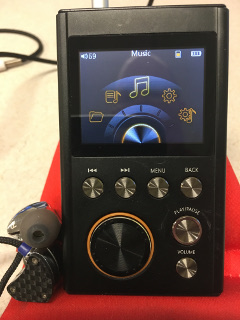 The buttons are metal, but the scroll wheel is plastic albeit with a metal outer banding. The scroll wheel has a ring around its outside edge with a series of three raised dots at each of the cardinal positions for added grip. My guess would be that machining the backside of the scroll wheel was too costly so the injection-molded part was used to cut costs. It does not look out of place and breakage does not appear to be a big concern, just interesting from a design decision standpoint as all the rest of the buttons are metal and silver in color while the scroll is black with a silver outer band. The biggest plus to the controls for me is that tactile response of each. The buttons are crisp with no noticeable slop or looseness in the frame while the scroll wheel has an audible click (not loud just enough to know it is there) to its movement that is present in the hardware as the behavior works even when the player is not powered on. This is a nice touch and something the more expensive DAPs with capacitive touch screens could learn from. The top of the player from left to right has the 3.5mm single ended output and 3.5mm line out jack followed by the power / screen button to the far left. 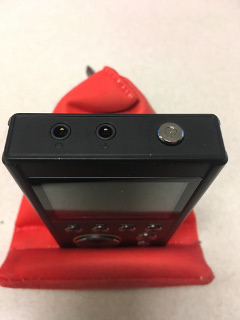 The bottom panel has the micro-USB charging port and the micro-SD slot. 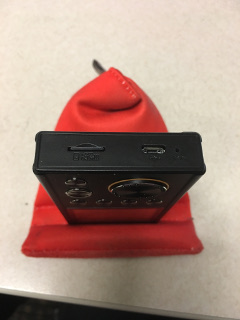 The rear and sides of the player are clean. The micro-SD card slot shows a top capacity of 128 GB but I had no trouble getting the R3 to read a 200 GB card I have been using. (YMMV of course).

The R3 spec shows a 1500mAh Li-poly battery pack with a rated playback time of 60 hours. It is worth noting that the rating is based on FLAC playback at 30% volume and most headphones I tried needed closer to 50% volume to be listenable. Even with this increase in volume, I was still able to go an entire workweek without a recharge. This is stellar performance and something many other DAPs could learn from. If you are a camper or hiker this alone should put this dap at the top of your list as the player and a single 10000mAh battery pack could literally give you over a month of use time without having to find a power outlet. That is amazing in an environment where it is common for DAPs to need a recharge before the end of the business day.

Boot time on the R3 is roughly 25 seconds and menu movement is quick with no discernible lag. The only real delay experienced is the about ½ second delay at the start of each track while loading album art. I attempted to test files with and without album art and did find that the omission of album art reduced that delay but did not entirely eliminate it.

The main screen on the player has a series of icons for settings, play settings, favorites, equalizer, folder view, classification of music, and music. I will hit the highlight of each icon in order but will not be attempting to cover every option available. I will pay particular attention to areas where differences exist between the R3 and the x10. 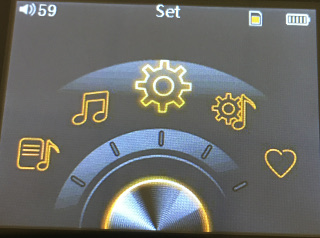 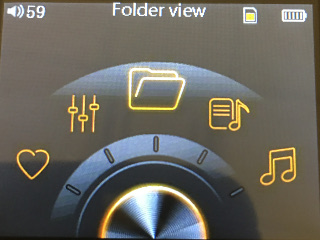 The backlight timer and off timer are both customizable. The system firmware lists revision 1.1 and a firmware update option exists but no newer firmware was available at the time of review. The only odd thing under settings is the create playlist option which would be better housed under the Classification of music or the Favorites Icon in my view.

Under play settings, we have shuffle, repeat, default volume, and line level. All are self- explanatory except for line level, which has three options. The options are 0db (true line out), -6 dB (reduced line out) and volume Sync which allows the use of the players volume control and allows for the connection of a 2nd set of headphones.

EQ has six presets but unlike the x10 firmware, it does have custom option for tuning the EQ to your liking rather than only the presets. This takes the EQ from being an afterthought to being a useful tool and is definitely points in the R3 favor. This alone may be worth the price difference in the cheapest x10 on ali and the Gearbest asking price for the R3. 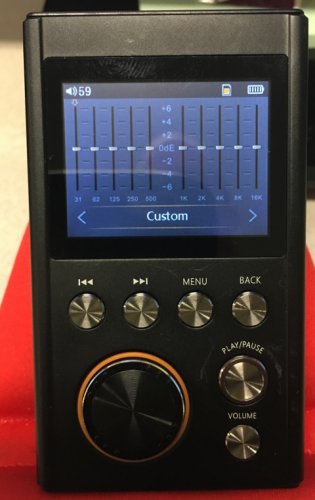 Folder view is exactly as expected.

Classification of music lets the user select by Artist, Genre, or Album in addition to all songs.

Finally, Music would be better titled “Now playing” and shows a wealth of information about the current track. 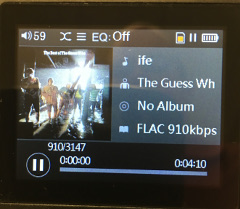 One other feature of the UI worth noting is that the x10 prompted for resume on every startup. The R3 simply starts where it left off with no such annoying prompt. Another point in the R3’s favor.

The only remaining UI issue from the x10 is that to get to Home from Now playing takes 4 presses of the back button. It would be a welcome change to see the shortcut to home.

Volume on the other hand is accessible from any screen by pushing the volume button. This brings up the volume display and the scroll wheel is used to adjust volume from zero to 100. Realistically about 25 up is of use. A slight channel imbalance is present below about 15, which is common for inexpensive daps. Once you set the desired volume clicking the volume button a 2nd time returns you to the original screen with the music still in progress. The lack of physical volume buttons does prevent in-pocket adjustments and will be a deal breaker to some.

The R3 is rated at > = 80mw output, respectable for a pocket DAP. The R3 has native support for MP3, WMA, WAV, APE, and FLAC. Unlike the Benjie K9, the R3 was able to play my entire FLAC library without having to down-convert some of the higher bitrates. The chip is a WM8965 and at first some might confuse this for a Wolfson product based on the naming convention but it is actually a chip made by Wisdom/Xinzhihui. The op amp is a TI TPA6530. This pair works very well to power IEMs but can struggle a bit with full sized cans. The line out is also a bit under powered as volumes on my paired amplifier had to be increased when compared to the line out of the Cayin N3 or Fiio X5iii. It should be noted that the Cayin itself is a 1V output as opposed to the normal 2V so this is a substantial weakness in the R3. The R3 would not power the Fostex T50rp to listenable levels without an additional amp. Not surprising for a pocket dap, but worth noting if, this is your use case.

The sound profile is slightly warm leaning with good bass thump and extension. Mids are polite and well detailed but instrument separation is not huge and soundstage can get a bit crowded. Treble is well rendered without being harsh. Enough sparkle and air are present to keep this player from seeming a bit dark. These are exactly the same comments I made about the original x10 as I found no changes sonically between the two. This is a good thing as the x10 was a darned good DAP for its price.

The R3 shows all the pluses that made the NiNTAUS x10 a great value in the DAP market and has gone most of the way toward correcting the biggest complaints leveled against the x10. Languages are now much better. The EQ has a bonafide custom option that allows tweaking, and the annoying resume messages are gone. If you are looking for a good sounding DAP with ridiculous battery life, take a look at the Crazier R3.