BACKGROUND: I was given the MS301 by Mixcder in exchange for writing a review. I appreciate the chance to try new things and always look for the positive. Most of my income goes to putting kids through college so I have a particular interest in the budget-fi category of products.

I resisted Bluetooth headphones for a long time as I thought they cured a problem I didn’t have. Seldom has the biggest concern in my life been the wire between my phone or DAP and my ears. To me the trade-off wasn’t worth it. Give up sound quality in order to lose a wire, not a good trade. Here lately though it seems everybody has a new Bluetooth headphone and after the first few attempts to resist I grudgingly agreed to try out a pair. One of my pet peeves is giving anything a pass it doesn’t deserve so I categorically refuse to say “this is good for a Bluetooth headphone”. Either it is a good headphone, or it is not, how it connects to the source shouldn’t change the nature of that discussion. Having said that, let’s look at the MS301.

The Mixcder MS301 is their premium offering at roughly $90 retail and the outside of the packaging reflects that. The Black and gold is elegantly understated and yet makes sure all the pertinent details are there right up front. 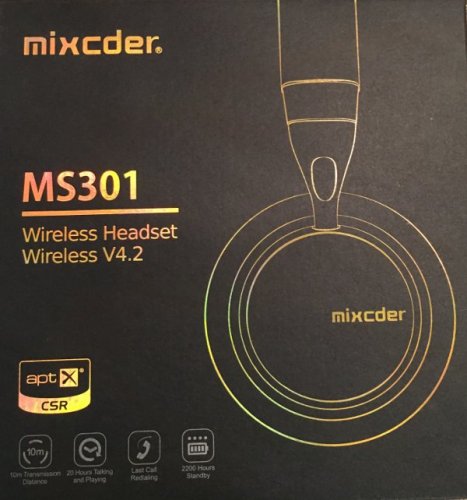 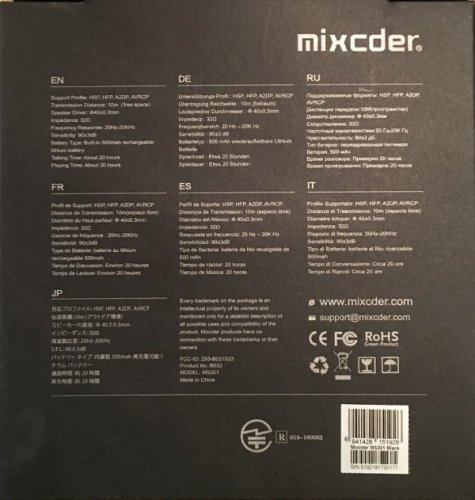 The inside of the packaging doesn’t measure up to the same standard. A spartan plastic tray holds a small box and the phones. The manual hides underneath the tray and that is the entire kit. A travel bag to protect the headphones would be a welcome addition to the kit and maybe a velvet coating on the plastic to give it a bit more of a premium feel would be good. The small box contains a micro-USB cable for charging and a 3.5mm cable for wired use. 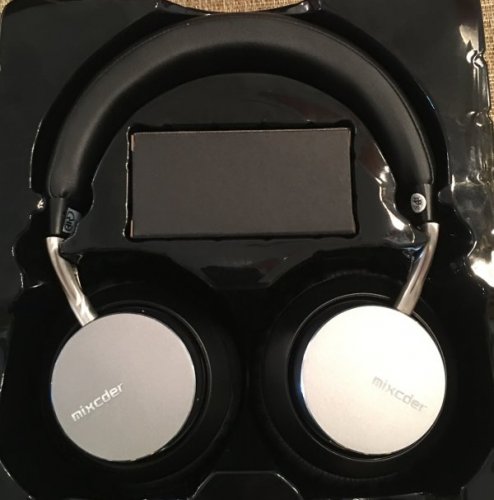 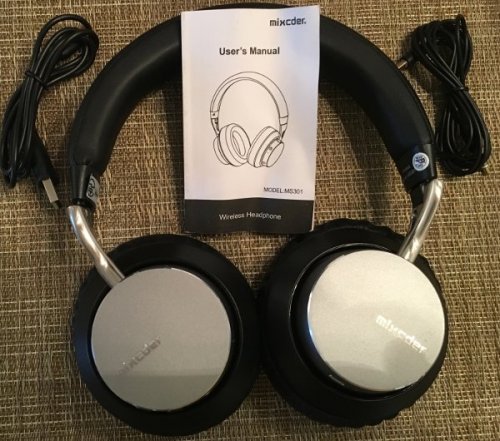 Build quality is good with aluminum cups supported by stainless steel that attaches at the 12 o’clock position. The Hinges are metal on metal so no plastic contact points to wear. The headband adjustment is plastic as seen below but is backed with a stainless band and is solid. The pseudo-leather cups and headband are well padded and quite comfortable without being hot after extended wear. Kudos on that as few pads can both isolate and not overheat. This is definitely points in the MS301s favor. The cups rotate 90 degrees one way and roughly 15 the other to allow for a comfortable fit, and the pad and driver has about 15 degrees of movement on the horizontal axis inside the aluminum cups to allow for better comfort and fit. Again, well done and these should fit most people with a little adjustment of the band. 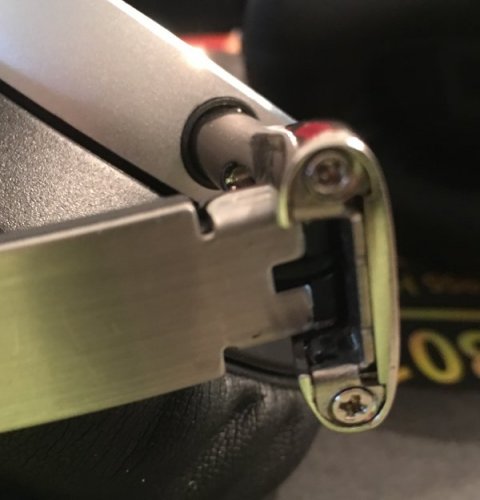 The pads can be removed by twisting them roughly 1/8 turn counter-clockwise as they lock into the driver housing using 4 clips. The drivers themselves are damped as seen below and are in a separate chamber from the Bluetooth circuit board and battery which are contained in the outer portion of the aluminum housings. 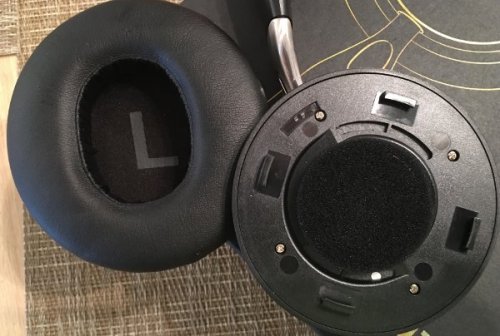 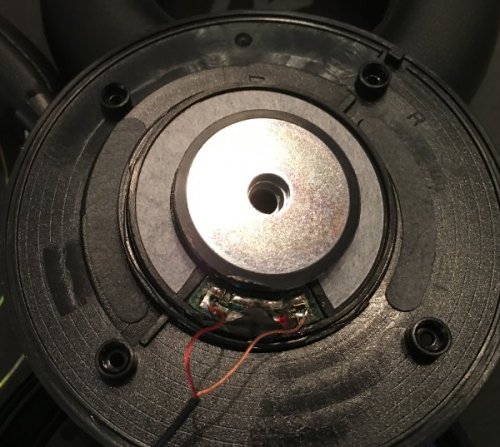 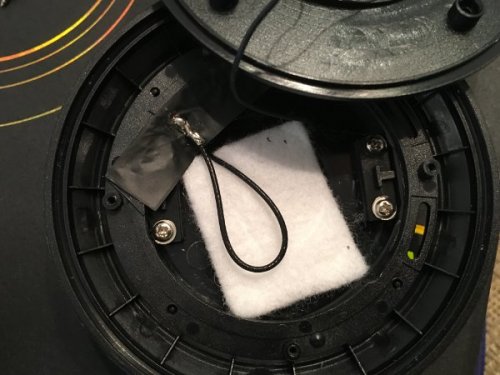 Controls are simple. On the left cup we have the USB connection for charging. On the right cup we have the 3 buttons. The topmost is power/ pairing. Then we have an LED that shows blue when powered on or blinks for pairing. The bottom two buttons are volume increase and decrease followed by the 3.5mm jack for wired use. The microphone isn’t labeled and two pin holes (one in either cup) are the only hint it exists. 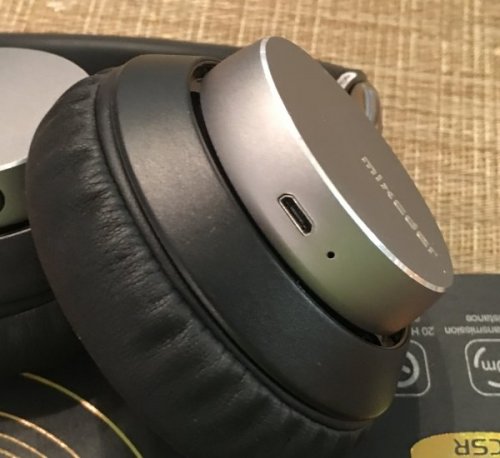 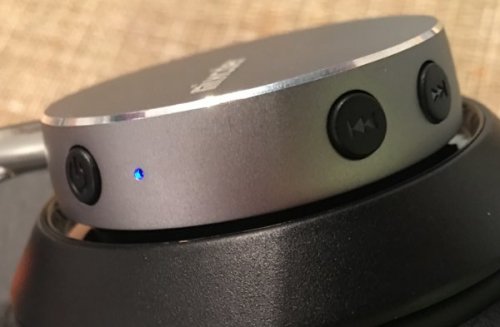 Mixcder lists these as charging to full in 2 hours from drained and working for 22 hours. The battery is listed as a 500mAh lithium ion cell. Based on my usage, I found the times to be realistic if maybe a tough optimistic. I was able to average about 16 hours of use time before it needed recharging. While a 2.1 Amp charger would charge the headphone in 2 hours, it would be wise to use a slower charger and preserve the battery as quick charging will result in shortened usable life.

The MS301 is one of a very few headphones on the market that supports the latest Bluetooth standard (4.2) with AptX. Pairing is simple and quick with nothing unexpected. I was able to use the headphones within 50 feet of the source without a single hiccup and no interference from other devices. This is better than the experience I have had with most other Bluetooth sets which have had problems with range and lots of interference when other Bluetooth licenses are in use. Mixcder has done a good job on the Bluetooth implementation as it worked exactly as advertised and is indeed a premium experience compared to the average device.

Under normal circumstances, I wouldn’t give isolation a heading by itself but the MS301 warrants it. Due to the design, these have elements that would lead one to think they were open back as the housing is 2 pieces. Closer inspection shows the drivers are isolated into a chamber and it behaves like a closed back where isolation is concerned. They have a small amount of leakage but would be very usable on a plane or in travel situations. The only place I found I could not use them was in bed as my wife was annoyed while trying to sleep. The good news is that small amount of leakage is enough to create a headphone that sounds a lot more like an open back than it does a closed back. So let’s get to what everyone came for, what does it sound like?

I paired the headphones to my HTC m9 with USB Audio Player Pro. Listening was done with mostly Flac with a few 320bit Mp3s thrown in for good measure. I then paired to an I-phone 6S+ and did the same tests. Lastly, I paired them with my Fiio X3 using the 3.5mm cable and my Xduoo X3 using the same. I had a little overlap with a review tour of the Cayin N3 so tried the MS301 paired with the N3 via Bluetooth.

The sound is a shallow V shape that leans a bit to the warm side.

Bass has good extension and good punch. While elevated, the bass is not bloated or out of proportion and is much cleaner than some others I have tried. Sub-bass is present but not prominent and a mid-bass hump is present but not overwhelming. Overall, the bass on these is a good mix of quantity and quality. With a bit of EQ, the bass can be toned down and the MS301 becomes a very good balanced headphone. With a bit of EQ in the other direction, these can become a bit of a bass cannon for those that prefer that signature.

Mids are good. I mean really good. These do not suffer from the typical recessed mids seen on so many V shaped consumer headphones, nor do they have massive bass bleed into the mids as is also common. Male vocals are clear and potent and female vocals are well rendered, and lifelike.

Treble is controlled but does have some sparkle and airiness without sibilance in the female vocals. Again, treble responded well to EQ and could be used to flatten the response curve to produce a very analytical sound from a headphone that started out a more commercial V profile.

Soundstage is better than expected and sounds much more like an open back than a closed. Instrument separation was good and width of soundstage was very good. Depth of the sound stage is somewhat limited but less so than I was expecting in a low powered closed back design.

The headphones worked well for making and receiving calls. The microphone was sensitive to wind and outside noise as is typical with cup mounted microphones.

The Mixcder Ms301 represents Mixcder’s premium offering in price, style, features, and sound. Did Mixcder succeed in creating a premium experience? Yes! These remind me a lot of the Sennheiser 598SE in a Bluetooth design with better styling cues. These are easily the best Bluetooth headphone I have tried and deserve to be called a good headphone. Not good for a Bluetooth design, just plain good. These compete with wired designs of similar pricing on an even footing. If you are looking for a good headphone in the sub-$100 category, these deserve a good hard look. For those of you who have been waiting for a Bluetooth headphone that gave wired designs a run for their money in the sound quality department, your headphone has arrived and it’s called the Mixcder MS301.

Cons – Could use a travel bag to prevent scratches