Disclaimer –     These were provided to me by Fiio in exchange for my honest review.

Others have introduced Fiio and gone through a lot of the background so I’m going to dive right in.   I’m a music lover, an engineer by trade (not a sound guy) and a hobbyist.  I make no claim to have a golden ear, nor do I pretend to know anything.  I took on this review with the idea that these headphones are being marketed at a price point that puts them in the category of “replace and improve the earphones that came with my phone”.   These are not high-end, even with an MSRP of $49.99 they would be in the budget section and at $10 they certainly fall into the ultra-budget category.  As such, I did all my testing using an I-phone 6s+ and an HTC M9

Packaging – The box is very plain and does little to tell the user what to expect.  It certainly doesn’t help “Sell” the product as if seen on the rack at the big box store I’m not sure someone would know it was earbuds made by Fiio without taking some time to do so.  When opening the box, it does have a nice slide-out tray that makes accessing the contents and re-use of the box more practical. 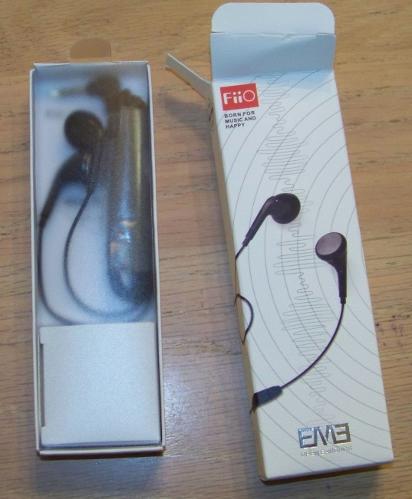 Build – Plain black plastic housing and rubber coated cable.   The cable is nicer than most in that it doesn’t seem to want to kink and tangle, nor does it feel tacky to the touch. It would be nice if donut foams were provided and if the left and right were more clearly marked as they are on the stem of bud itself and are simply a raised letter on the plastic.  In direct light the glare obscures the lettering entirely. Cable to connector and earbud fit is good with no gaps or puckers.  The inline mic is fitted nicely and not bulky but again the button on it is completely unmarked and is the same color as the housing so if it weren’t for a tactile click when pressed people might not know it was there at all.   As promised, I will run these through the washer and dryer in a jeans pocket on Friday.  Problem is, I like these so I had to order a 2nd set from Amazon tonight. 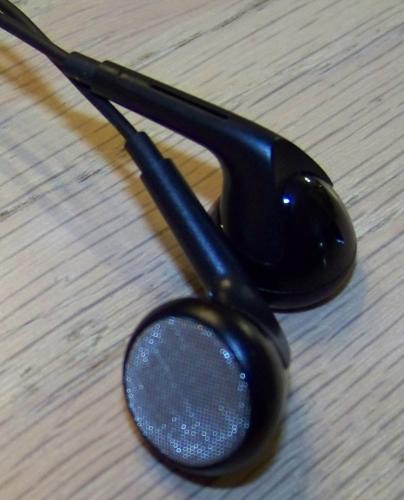 Sound – First off, my impressions are sans foams since I saw no reason to muddy the sound with them. Also, after listening briefly straight out of the box, I put the buds on a 24 hour burn-in with pink noise.  These buds definitely need burn-in time so don’t judge them until they are truly broken in.

Bass – Good bass depth and extension but quantity is a bit lacking.  The bass quantity can be corrected with bass boost or EQ but is deficient when used without EQ adjustment.

Mids – This is the heart and soul of the EM3.  These have one of the best mids of any iem, earphone, or headphone I own.  This includes Grado, Sennheiser, and Fostex models.  Mids are full, well stated, and clean.

Highs – Treble is a bit rolled-off but well behaved with no sibilance.  This is a balancing act and it would be easy to fault them for this but the alternative is a forward aggressive treble that makes long listening sessions painful.   I do feel cymbals resonated well and were reasonably accurately reproduced which is hard at any level but beyond expectation at the $10 level.

Vs Apple Buds (I-phone 6s+) Build quality of the EM3 is better with the cable on the I-buds being terrible.  Sound is more open but thinner on the I-bud.  The EM3 has a smaller soundstage but a much fuller sound.  The I-buds are much thinner sounding in the mids and highs.

Vs HTC Buds (M9) Build quality of the EM3 is way better.  The HTC with its flat cable just looks cheap in comparison.   The HTC has a very V-shaped profile with harsh treble and a lot of sibilance in female vocals.  The EM3 is much more balanced and easily more listenable.

Vs VE Monk Build quality is a tie with both being solid designs.  The monk is harder to drive than the EM3 usually requiring about 8% more volume to achieve equal listening level.  For that extra input power, the monk does deliver a slightly larger soundstage than the EM3.  The monk does have more fatiguing treble than the EM3 and the EM3 is a better all-around bud when considering more aggressive genres in the mix.

Wrap Up –
Would I buy this product to replace what came with my phone?  Yes.

Would I buy this product to upgrade from the earphones that came with my phone? Yes.

Would I recommend these to others looking for an inexpensive, non-fatiguing bud? Yes.

Are they perfect?  They are closer than they deserve to be for a $10 earbud.

Is Fiio going to have trouble keeping up with demand? Probably

Cons – Rolled off bass and treble (somewhat expected on an earbud that doesn’t seal). Needs donut foams as foams cause some muddying of sound.